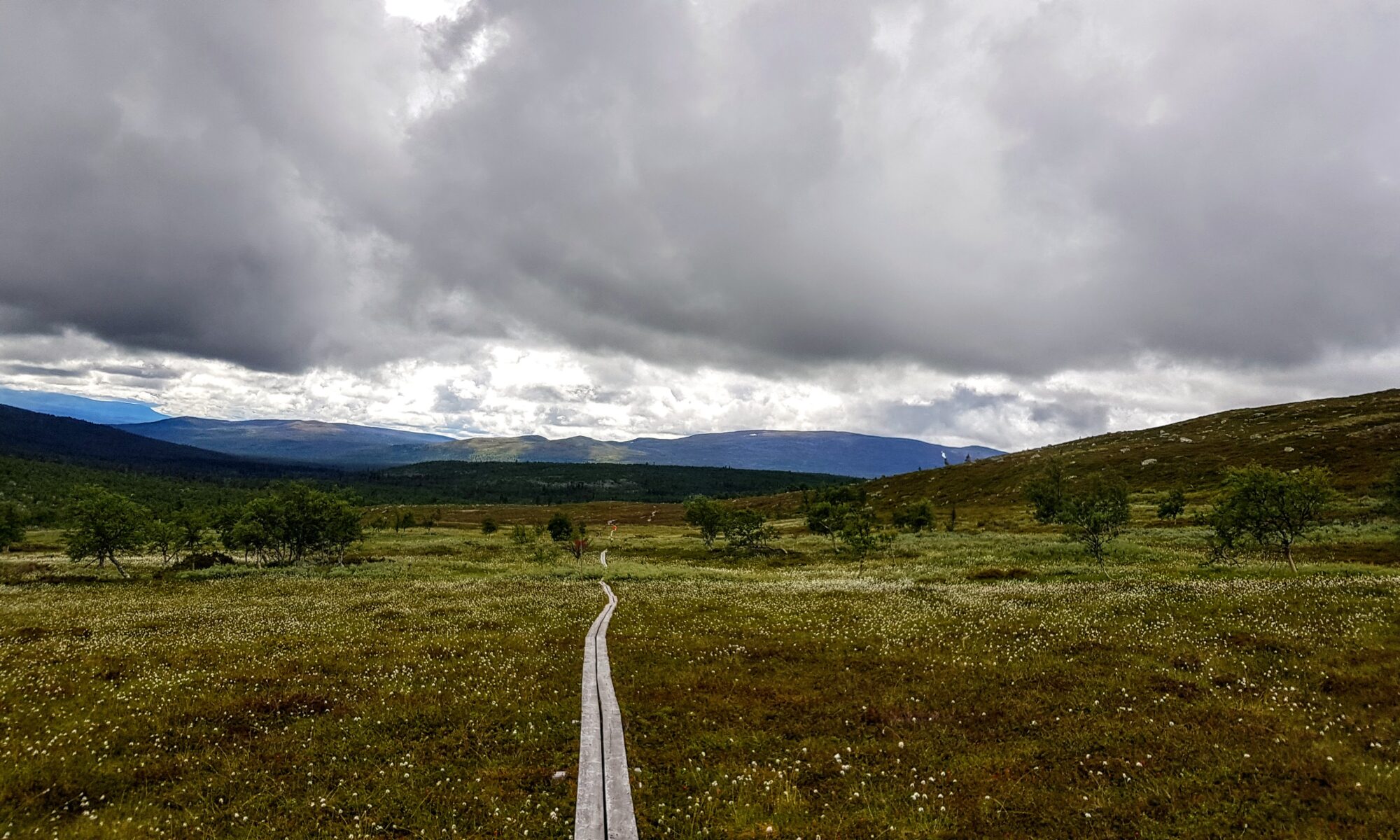 Grövelsjön is situated in Sweden right at the Norwegian boarder. This is where the Swedish mountain range starts and a popular starting point for hikers. The Grövelsjön mountains are not the highest or most dramatic but still visitors come back here year after year for many reasons.
This post is describing a 3 day tour into the Grövelsjön mountains that took place in July 2020.

Too much text? Just watch the video instead.

As most hikers we started this tour at the STF Grövelsjön mountain station. A little bit rain in the air but the mood is on top. The hike starts upwards and it doesn’t take long until the trees starts to get scarser and the views starts to appear. We follow the trail towards lake Hävlingen which leads us towards our desired direction. After a bit more than an hour one have come to the lakes of Fosksjöarna. The lakes are part of a smaller lake system and one can stop here and explore the surroundings and fish in the lakes and streams if one had the time. Here we deviated from the trail and started to walk off the beaten track towards Töfsingedalen national park.

Now we also pass Storväteshogna which is Dalarnas highest peak. The peak is a simple hike to the top and can be done as a day tour starting from Grövelsjön mountain station. Deciding to leave the hike to the top for another time and went on our planned tour.

After some time we started to move down into the valley towards Töfsingedalen. Now the notorious mosquitos started to appear as well. First only some but when we where down in the valley and followed the stream of Storån they were swarming around us. No chance to stop and rest now but tried to move on to not get eaten by the mosquitos.

Storån is a very popular fishing destination. The water is quoted and only few lucky fishermen get permission to fish here and only fly fishing is permitted.

When crossing the river we now enter Töfsingedalens national park. Töfsingedalen is really something different compared to other national parks. Here there is a modest sign that indicates that you entering a national park but nothing else. There is no other sign of human impact at all like already walked trails or similar. We didn’t know much about Töfsingedalen previously but especally two things stood out. First there were all the dead trees that still stands everywhere. Old silver likes trees where the tree has been twisted over time. And the other thing that stood out was the miserable terrain with boulder fields that stretch over large parts of the park.

These boulder fields showed to be more of a challenge than we expected. Since we already had been driving the whole day and walked around 13 km we started to be a bit tired. To enter the boulder fields was testing us a bit since we needed to stay fully focused on every step one take especially since the rocks were slippery from the rain. In the beginning there is no big problems. But the fields just go on and on and one realize that this will take much longer than expected and there is no indication that one will leave this rough terrain, quite the contradictory, it’s just keep on coming.

On the way through the park one is passing some neat small lakes. And after some more time we finally we reach lake Töfsingen which is just outside the national park boarders. Now we had to round the lake and start head up towards the mountain again to find some place where we could set camp. Rounding the lake once again includes to move through some rough boulder fields. On the north side of the lake there where some huts and a few 100 meters north again another cabin where we stayed to make some dinner and dry up.

On the next day we where once again filled with optimism, forgotten everything from the tough day we had behind us. Slowly start to hike up towards the mountain again and for now happy to leave Töfsingedalen behind us. The temperature was around 10 degrees and no rain which was welcome. The views starts to appear once again and we could see the cabin of Storrödtjärn at the distance. We set course towards the north point of lake Hävlingen where we would cross to the other side and then start hike back towards Grövelsjön.

When heading down towards the lake the boulder fields started to appear again and, just as the previous day, our progress went much slower than anticipated. A bit later than expected we crossed to the west side of Hävlingen. Here we found that there was some cosy cabins one could use. Still had some kilometers to hike until we felt we would be ready for the day so we kept on moving. Since the next day would include a long drive we didn’t want to have a too long hike the last day. Ended up setting camp at a nice lake about 7 kilometers from Grövelsjön mountain station. The timing was perfect since there was some heavy rain coming in.

The next day there wasn’t too much to do other than take down camp and hike the last kilometers towards Grövelsjön. A bit sad that the trip was coming to an end but very happy for the time we had spent in the Grövelsjön mountains. When getting closer to the mountains station one could see how the trails are getting wider and starting to meet other hikers. Most of them where daytrippers with base at the Grövelsjön mountain station.
The trip had been a bit harder than we first had anticipated but those are often the most memorable.